I went onto abebooks.com and found three books by Jacques Saint Germain - two with inscriptions from the author. 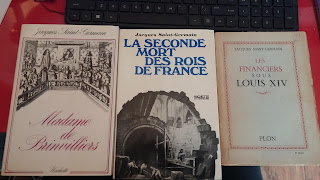 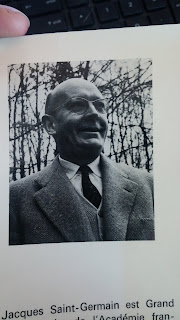 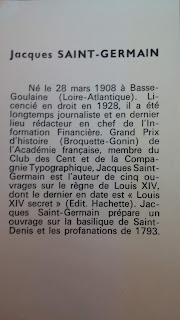 This is nearly all the information I have been able to find on this guy.  Since not everyone reads French, here's a general translation of his little bio:


"Born on March 28, 1908 in Basse-Goulaine (Loire-Atlantique).  He got a law degree in 1928 and was a long-time journalist and the last editor of The Information Financiere.  He received an award in history from the French Academy.  He is a member of Club des Cent and the Typographic Company.  He has written 5 books on the reign of Louis XIV.  He is preparing a book on the Basilica de Saint-Denis and the profanations of 1793." 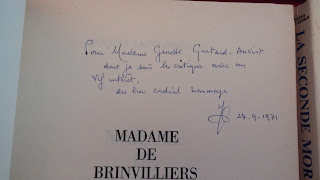 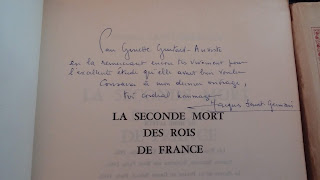 As always, despite feeling like this is a dead end, let's compare to the Count's handwriting.  Click to enlarge all photos. 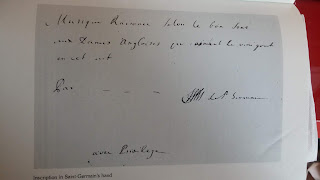 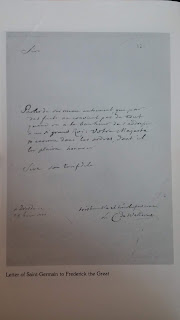 Both handwriting styles are small and tight.  The capital "M"s are different, almost mirrored to each other.  The flourish is on opposite sides.  Capital "G" and "A" differ between the two handwritings.  Different "J".  Similar lowercase letters and letter flourishes.

I think it's a bust.  The guy in the photo doesn't share the facial features that we get from the paintings and engravings of the Count.  Handwriting is close, but there are some key letters that are really different.

Why Did I Bother With This Guy?
All tangents need to be looked at before either accepting it or discarding it.  Also, this guy wrote books that fit into the time frame.  I might have some cool new resources for my bibliography!  I have to go through the books.

I was really intrigued by this guy's work.  I mean, aside from the last name, he really seemed to like writing about the time frame that the Count would have been flourishing in.

I'm going to move this guy's work into Books Not By The Count under the BIBLIOGRAPHY.  It's still relevant, due to subject matter, but just by our Count.

What's Next?
I'm still not done with Jacques Saint-Germain.  Since we first got word about a vampire legend in New Orleans, I will be traveling to NOLA in November.  I have started inquiries about the origins of the legend.

I have scoured legend variations for particular details - names, dates, etc.  I spent SO MUCH TIME going through old newspapers, but there has not been anything written about a "Jacques Saint-Germain" that I have been able to find.

Side Note from Jessie
As always, I extend an invitation to share information with me.  I like to ask for references.  If you can't provide a reference for your information, then it's useless for my research.  Just let me know where you got your info from - simple!  EMAIL - JessieDesmond@Rocketmail.com

I get a fairly steady stream of emails from people and I'm wondering if I actually have...fans.  It seems like a foreign thing and I feel so awkward for wondering about it.  Do I need some sort of social media something for this blog like a facebook group?  Let's see who is interested.  NEW facebook group: Finding Count St. Germain
Posted by Jessie at 1:59 PM