A few months ago, J Dean sent me this email pointing me to a website with some information on the Count's music.   You can visit the website to hear the actual music and to read more.

The Music of Count St Germain

(Below is an excerpt of the article from Anthroposophical Music)

An associate of Handel and also the composer Jean-Philippe Rameau, Saint Germain was praised for his ability to compose and perform exquisite musical pieces.

At Versailles he gave concerts on the violin (it was said that he played the violin “like an orchestra”) and on one occasion he conducted a symphony without use of a score.

Saint Germain’s compositions were quite popular in London as well. The newspaper of London said of Saint Germain, “With regard to music, he not only played but composed; and both in high taste. Nay, his very ideas were accommodated to the art; and in those occurrences which had no relation to music, he found means to express himself in figurative terms deduced from this science.”

Charles Burney, the composer of “God Save the King,” writes in his History of Music about a time when one of the several songs Saint Germain had composed was used every night of the Opera season as the encore performance of the “first woman” of the opera—Farsi, Handel’s prema donna and the one who sang all of his oratorios for him including his Messiah. So popular was Saint Germain’s song—“Per pieta bel idol mio” (For pity’s sake, beautiful idol of mine) that the manager of the opera house had the first few lines of the song, including both staves and words, painted as a huge mural on the wall of his home in London. 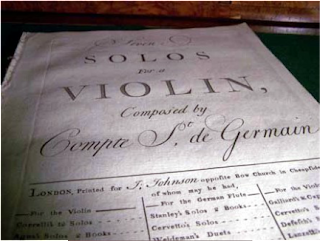 Another beloved piece by our adept was “That Maid That’s Made for Love and Me.” Another called simply “A New Song,” was also known by its first line, “O wouldst thou know what sacred charms.” This song was sung by a famous tenor of the time who performed only the best musical compositions. The piece was printed in New Grove’s Dictionary of Music and Musicians as well as The London Magazine in 1747 and The Gentleman’s Magazine in that same year. The music is in 3/4-waltz time, which is the rhythm Saint Germain has always promoted as being healing for the heart, as it is its natural rhythm.

Some of Saint Germain’s compositions were meant for the amateur singer to perform in local salons. Others were formal works intended for the large orchestras of the day. He also provided new arrangements for several popular songs.

Most of Saint Germain’s musical compositions were published by Walsh, a well-known music publisher in London, who was given exclusive rights to publish a set of Italian Arias by Saint Germain through a note signed by the Secretary of State on November 27, 1749. This publication consisted of 42 arias and was 135 pages long! Saint Germain also wrote art songs in English, which Walsh published around 1747.

After doing extensive research to round up all the above information on Saint Germain’s musical career in eighteenth-century London, Theosophist Jean Overton-Street concluded: “Clearly Saint Germain was a composer of considerable competence and merit.”
Posted by Jessie at 7:27 PM